How did the Remington pump-action rifle evolve:

HomeUncategorizedHow did the Remington pump-action rifle evolve:
Posted March 20, 2019 by discrete-enter in Uncategorized

America’s oldest gunmaker, it has an enviable history with rifles. Some of the most unique models are the Remington pump-action rifles that span several decades of American firearms lore.

How did the Remington pump-action rifle evolve:

The production period from 1912 through 1935 saw the introduction of several variations of Remington pump rifles, including the Models 14/14A (22-inch barrel, pistol grip stock), 14R (18½-inch barrel, straight stock) and the Model 14½, which sported a 22½-inch tube. They were chambered for the .25, .30, .32 and .35 Remington cartridges, which were moderately popular at the time. High-grade guns were available — C, D and E grades — at premium prices.

A few years ago, I found a trim little Remington pump at a gun show. It turned out to be a Remington Model 141, “The GameMaster.” The M-141’s caliber marking on the barrel was most intriguing. Just ahead of the receiver was stamped “.30 REM,” and a cartridge case head was imbedded in the receiver. The little gun was in excellent condition, and I bought it on the spot. In the early 1900s, Winchester pretty much had the deer gun market sewed up. The then-new Model 1894 lever-action was available in several calibers, but the .30-30 Winchester was by far the most popular. Compact, light and handy, the M-94 in .30-30 Win. was the go-to gun for multitudes of hunters.

This popularity was not lost on Remington, as the brisk sales of M-94s — and Marlin and Savage lever guns of the period — took a large part of the market share. Rather than try to compete with Winchester with another lever-action, Remington took a different tact by introducing two different action types, a semi-automatic and a pump-action.

Men, You Don’t Need the Blue Pill if You Do This Once Daily
SunnyTwitter
Tragically Awkward Sports Photos
Routinejournal
If You Have Ear Ringing Do This Immediately (Ends Tinnitus)
Ear Clear

The Model 94 Winchester’s cartridges all had .506-inch rims, but these rimmed cartridges were not suitable for the pump-action M-141, so the Remington lineup was rimless, and all had a rim diameter of .421 inch — except for the .35 Remington, which had an odd .460-inch rim. Today, only the .35 Remington hangs on in production; the other three rounds are lost to history.

The Model 14, 14½ and 141 had a host of innovative features, including a spiral magazine tube that (presumably) prevented the tip of a spitzer bullet from setting off the primer of the cartridge ahead of it when the gun was fired. Magazine capacity is five rounds.

By unscrewing a large knurl-headed screw on the left side of the action, the receiver and barrel-magazine assembly can be easily and quickly separated from the buttstock and trigger guard, which is handy for packing on a train or stagecoach.

The M-141 has a 24-inch barrel with a seven-groove, 12-inch right-hand twist. While the listed bullet diameter of the .30 Remington is .307 inch, modern day .308-inch bullets intended for the .30-30 work just fine. Period literature on the M-141 notes that pointed bullets can be used in the gun because the design of the spiral magazine keeps the point of a bullet from resting on the primer ahead of it. However, more than one contemporary manual cautions against the use of spitzers in any tubular magazine.

It’s important to note that you can’t use .30-30 dies to reload the .30 Remington because of different case dimensions. You’ll need a set of .30 Remington dies, available from RCBS. Remember, for reliable functioning, the overall length of loaded rounds needs to be about 2.535 inches.

Factory loads can be easily duplicated with handloads, and Hornady’s LeveRevolution (LVR) powder from Hodgdon is a real boon for the lever-action reloader. LVR was designed to boost velocities about 100 fps in lever-action cartridges, and that it does. For suitable bullets for deer, the hunter can hardly go wrong with the traditional 150- and 170-grain flat point bullets designed for the .30-30.

As for the “best” powder, it’s a no-brainer: LVR wins by a mile. Not only does it deliver the highest velocities, it also produces good accuracy.

Working with the little M-141 was a refreshing step back in time. The engineers who designed the gun, the draftsmen who labored over the drawing boards, and the machinists who then skillfully crafted the guns did so with great pride in their work. Then there are the legions of hunters who bought these rifles and put them to their intended purpose. All M-141/141A rifles surviving today are a testament to their skill.

The introduction of the Model 760 in 1952 ushered in a new era of pump-actions for Big Green. The new M-760 was modern in every respect — for its day, of course. The .30-06 Springfield, .270 Winchester and the then popular .300 Savage were all chambered in the M-760. And it endures today in many disparate variations.

I was on the lookout for a good M-760 when I spied one at a local pawnshop. I like the .30-06 and .270, but geeze … aren’t there enough of them already? The hangtag read “.300 Savage,” a caliber for which I’d been searching a long time. The price was right, and I promptly bought it. I found that it was in excellent mechanical shape: Everything worked, the slide shuttled back and forth like it was on greased glass and the trigger pull wasn’t too bad. The bore was bright and the rifling looked as good as new. The bluing was good, and the only rust was on the right side of the front-sight ramp.

The spiffy new M-760 was designed by L. R. Crittendon and William Gail, Jr., and was ultimately offered in a total of 12 calibers. The M-760 was quite modern for its day: A rotating bolt had several small lugs that mated into corresponding cuts in the barrel extension, which made the M-760 much stronger than its predecessor, the M-141. The availability of the powerful .30-06, heretofore chambered only in bolt-action rifles, helped make the M-760 a hit, and this caliber was the most popular.

The M-760 forearm has twin action bars similar to the M-870 shotgun that was introduced just 2 years earlier. These bars actuate a carrier that holds the bolt, so that pumping the forend back rotates and unlocks the bolt and cocks the hammer. A horseshoe-shaped extractor riveted onto the bolt face pulls a cartridge from the chamber, and a plunger ejector flips the round to the side. A forward shove on the forend strips a cartridge off the box magazine, and as the bolt goes into the barrel extension, it rotates into battery. All in all, it was pretty slick — then and now. The factory instruction sheet is still available from Remington, as is the parts diagram.

The solid receiver allowed the mounting of a scope directly over the bore, and all but the very earliest M-760s came factory drilled and tapped. Those that weren’t could be sent back to Remington, which would perform this alteration for the meager sum of $6.50. The rifle came with a one-piece Weaver base installed, so I checked the screws and mounted a period correct Weaver K6 scope.

A modest selection of .300 Savage factory ammo is available today. I tested these loads, and all exhibited minute-of-deer accuracy, averaging around 2 inches at 100 yards, which I thought it was pretty good for a rifle almost as old as I am. Reloaders should be aware that the M-760 has a 12-inch twist, which might not stabilize some of the long and/or heavy bonded and lead-free bullets available today. All the loading manuals have data.

To some, the M-760 might appear as just another old clunker, but I see only history — not only in its clever and efficient design, and its classic old cartridge, but also its time in the woods, as evidenced by the scratches and dings here and there. Surely it has taken deer; has it tangled with a bear?

The M-7600 was introduced in January, 1981, and it continues in production today. It supplanted the older M-760; however, the new gun differed from the older one only in cosmetic details. The Model 6 was a replacement for the M-760 BDL Custom Deluxe, but it was more expensive than the new M-7600, and it was discontinued in 1988. Interestingly, the name iconic “GameMaster” name was not continued with the M-7600.

Numerous variations of the M-7600 were offered, and additional cartridges were added, including the terrific .35 Whelen (1988-1996), which was made a factory cartridge by Remington in 1957 after decades as a successful wildcat. Unique variations of the M-7600 include the Models 7615 (chambered to .223 Remington and which accepts AR-15 magazines), the 7615P Patrol Rifle, and the 7615SPS, a dealer-only special). There were fancy engraved guns, and a 200th Year Anniversary Limited Edition rifle made only in 2016 — Remington’s bicentennial. The bolt of my M-760 has two rows of five lugs that lock into the barrel extension. The newer M-7600s that I have examined have two large lugs, as does my .280.

I have had much enjoyment learning facts that many folks have already found out, of course. All are a look back in time. Each rifle has its own idiosyncrasies, but they all continue to do just what they were designed to do: shoot straight and work every time.

I have collected a nice Missouri 8-point buck with my .280 Rem., but I have not (as yet) harvested any game with the .30 Remington or .300 Savage, but their time afield is coming. Perhaps in a few decades, some other shooters who appreciate the accomplishments of the past will continue to enjoy these fine rifles. I certainly hope so. 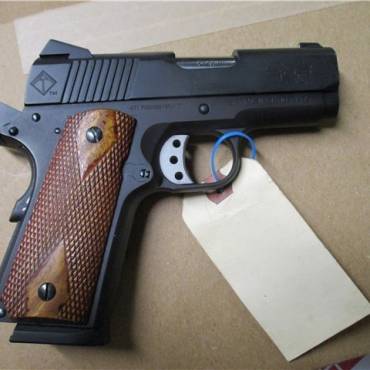 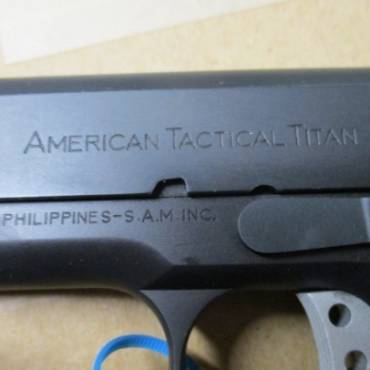 Everything you need to know about American Tactical Titan 1911