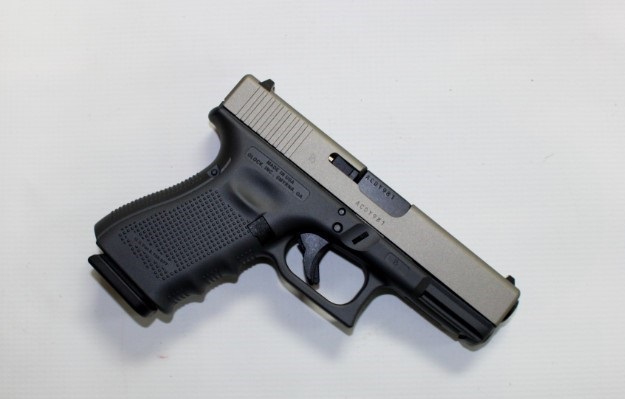 Posted May 17, 2020 by discrete-enter in Uncategorized

Having lived in the suburbs for a little under a decade now and working from home, I’ve never felt the need to get a smaller piece for concealed carry, much less one made of plastic. I’ve always had a dislike for plastic guns.

But being the true blue handgun enthusiast that I am, and being a guy who likes to try something new from time to time like all red-blooded men do, especially when that something is being sold at a bargain, I recently took a passing interest in a Gen 4 Glock 17.

They’re both Glocks. They’re chambered for the same caliber too, and except for the latter version having a stamp on the slide that says Gen 4, they look and feel the same. But I know somehow that stamp isn’t just for show.

I’ve heard from friends that Gen 4 Glocks have a lot of significant improvements over previous-generation designs, but with those inevitably came unwelcome changes. The adage “you can’t make an omelet without breaking eggs” rings so true here. But to what extent?

Today, we’re taking a look at the problems commonly associated with Gen 4 Glock pistols in general. If you’re in the same situation I’m in and you’re torn between any previous generation Glocks and their Gen 4 counterparts, read on. Maybe you’ll find info to help you decide whether or not the Gen 4 you’re eyeing will fit your needs.

Glock released the Gen 4 in 2010. And the first thing people noticed with these pistols is for the first time, they all bear the Gen4 mark on the slide. The company has finally acknowledged the way Glock owners label their pistols as far as generational improvements.

All Gen 4 models now have a “Gen 4” stamp laser-etched on their slides just next to the model number, making them easily distinguishable from previous-generation Glock pistols.

Another new feature that distinguishes Gen 4 pistols from previous-gen Glocks is its finish. The company uses a newer salt-bath ferritic-nitrocarburizing finishing processwhich Glock aficionados refer to as Melonite.

The Melonite process presumably results in a more durable finish compared to the previous Tenifer process for better corrosion resistance on the slide’s surface. As far as aesthetics, there are some who don’t like it — they claim that the shade of black Gen 4 pistols use this time looks a little bit on the dull gray side of things.

I think it’s a subjective thing as I personally don’t care too much about Glock aesthetics. I mean come on, these are Glocks, not high-end custom 1911s. And reliability and beauty don’t always go hand in hand. As long as the finish is corrosion-resistant, I’m all for it.

Gen 4 Glocks also come with grips that are relatively thinner compared to all previous generation pistols. The grips were designed to be smaller for two reasons: one, so that people with smaller hands get a more solid purchase on it; and two, so that it can accommodate another new feature — interchangeable backstraps support.

And speaking of magazines, Gen 4 pistols now come with three magazines in the box instead of the usual two (though Gen 4 pistols typically cost slightly higher than Gen 3s even when factoring in the cost of the additional magazine and the backstraps).

Another readily visible difference can be easily seen when looking closely at the business ends of Gen 3 and Gen 4 pistols. The latter’s recoil guide rod has a larger diameter and this isn’t for show. The bigger-diameter guide rod is part of a newer recoil system designed to minimize wear on the frame.

The newer dual-captive spring recoil guide rod was designed to alleviate this problem. These recoil springs are much different from the old springs as they’re captive (meaning the user wouldn’t have to worry about losing the spring when they field strip the gun as it’s attached to the guide rod). The new spring attaches to the guide rod via a steel lip on the end. The old spring doesn’t have this steel lip — it just rides against the guide rod, similar to how typical 1911 recoil springs function.

To fit the new beefier recoil guide rod, Gen 4 slides have to have a bigger cutout portion in front. This means a Gen 3 recoil guide rod will not fit in a Gen 4 slide unless you use one of the adapter rings they sell on their website.

As the grip and frame profile is now a little slimmer, Glock had to reshape the slide’s internal design. Comparing Gen 3 and Gen 4 slides, we noticed that there are slight differences especially in stress points where some of the slide’s walls are longer and thicker.

Because of all the alterations in the frame and grip dimensions, three key components of all Gen 4 handgun’s action also had to go through slight changes in measurement — specifically the size of the ejection window, the extractor, and the ejector.

With all the features come problems that early adopters of the Glock Gen 4 had to put up with, three of the most common problems being directly related to the change in frame and grip dimensions. One of them is the Gen 4’s heavier trigger pull.

Because the Gen 4’s grip is thinner, it logically follows that the frame and slide have to be thinned out a little as well. With the slightest changes in the overall dimensions of the frame and slide, a somewhat smaller trigger group has to be used.

Field-stripping the pistol and examining the internals reveal a bulge on that part of the trigger bar that sticks out (this part is supposed to deactivate the trigger safety whenever the trigger is pulled, thus firing the weapon). It looks strangely different when compared to the same part on a Gen 3’s trigger bar.

Glock reportedly put that little bulge on there to make sure the firing pin stays centered when striking the primer of a chambered cartridge.