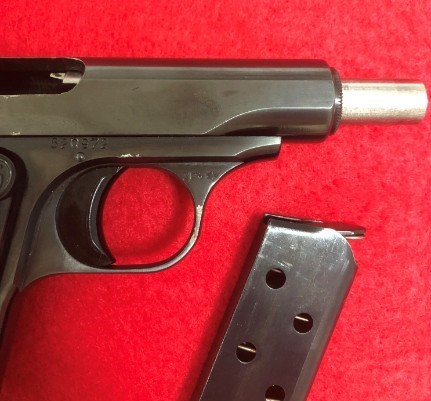 Buy FN Browning online This is a beautiful post-WWII FN-Browning Model of 1910. This pistol is Belgian made and proofed on the slide and grip frame. Light handling wears is evident throughout, although pronounced. wear on rear of slide and frame. Safety toggle, and heel magazine release functioning properly. Includes one magazine that holds 6 rounds. SN is 620972 and matching throughout. Comes with one magazine. The slide is marked (in English) “BROWNING ARMS COMPANY St Louis Mo & Montreal P.Q. MADE IN BELGIUM.”

Metal Finish Condition: Good. The factory finish is a beautiful deep blue. There is wear down to the base metal on the rear of the slide and frame. The safety toggle shows modest wear as well.

Box and Papers: None

FN Model 1910 of the Gendarmerie of Vaud, on display at Morges castle museum

Browning M 1910 disassembled
The FN Model 1910, also known as the Browning model 1910, was a departure for Browning. Before, his designs were produced by both FN in Europe and Colt Firearms in the United States. Since Colt did not want to produce it, Browning chose to patent and produce this design in Europe only. Introduced in 1910, this pistol used a novel operating spring location surrounding the barrel. This location became the standard in such future weapons as the Walther PPK and Russian Makarov.

It incorporated the standard Browning striker-firing mechanism and a grip safety along with a magazine safety and an external safety lever (known as the “triple safety”) in a compact package. Offered in both .380 ACP (6-round magazine) and .32 ACP (7-round magazine) calibres, it remained in production until 1983. It is possible to switch calibres by changing only the barrel. However, FN never offered packages containing a single pistol with both calibre barrels.

FN Model 1922 7.65mm
A variant of the Model 1910 was known variously as the Model 1922 or 1910/22. This was a larger model with a longer barrel (113 mm), slide extension, and a longer grip frame to accommodate an extra two rounds. This model was aimed at military and police contracts and many examples were produced for various agencies. The FN Model 1910 was initially designed for the Kingdom of Serbia. In 1913, a purchase order for 235, Model 1910 semi-automatic pistols were made by the Serbian National Army. The purchase was made for the 1st and 2nd Timok infantry divisions of the first army.

1910/1922 pistols went on to see extensive service in World War Two and continued to be manufactured by the Germans after their occupation of Belgium and seizure of the FN factory. These examples carry Nazi production stamps, and most have simple chequered wood grips instead of the earlier horn or plastic grips bearing the FN logo.

The FN Model 1922 was also used by the following countries: Yugoslavia (60,000 Automatski pistols (Brauning) 9mm M.22 between 1923 and 1930), The Netherlands, Greece, Turkey, Romania, France, Finland, Denmark, and West Germany in the post-war period. While the Model 1910 was widely sold on both civilian and military markets, the Model 1922 was considered specifically a military and police pistol, with FN offering it to individual civilians only by special order.

In 1955, the Browning Arms Company introduced the Model 1910 pistol for the American market as the Model 1955. Made in Belgium, this model was virtually identical to the European model except for the markings and grips. Importation ceased in 1968 due to the passage of stricter gun-control laws in the U.S.

Another version, the Model 1971, featured a longer barrel and slide (similar in length to the Model 1922, but with a one-piece slide), adjustable sights, a finger-rest magazine, and enlarged “target” grips. These features were intended to comply with the Gun Control Act of 1968 which had halted the import of the Model 1955.

North Korea made copies of the Model 1910 without licence[citation needed] as the Type 70 pistol. The weapon is made not only for domestic use but also for export.

The Hamada Type or Hamada Type Automatic handgun (浜田式 Hamada Shiki?) was a semi-automatic pistol developed in 1941 for use by the Empire of Japan during World War II. Developed by Bunji Hamada, the pistol took its basic design from the Model 1910 Browning. Production occurred at the Japanese Firearms Manufacturing Company, with only minor changes made as the war progressed.