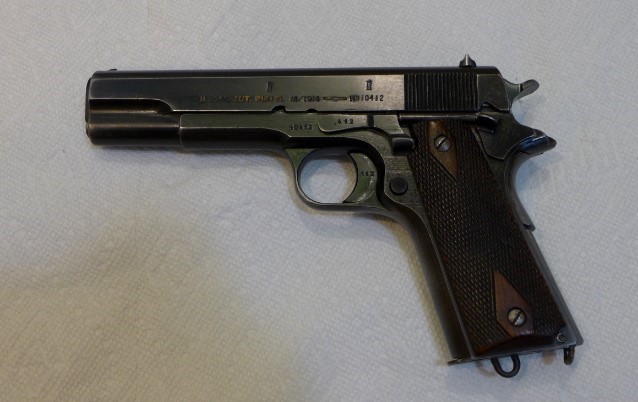 History
Norway adopted the 7.5 mm Nagant revolver (named M/1893) as the standard Norwegian military sidearm in 1893. Commissions to test possible new service pistols were active from 1904 till 1911. In 1911, a commission recommended the adoption of the semi-automatic .38 ACP caliber Colt Military Model 1902 pistol, after field trials with 25 such pistols, all purchased from Colt’s London Agency. However, as the US had just adopted the Colt .45ACP M1911 pistol it was decided to conduct further tests. A pistol of the new M1911 design was received in Norway in January 1913. Following extensive tests through early 1914, it was finally decided, in August 1914, to adopt the Colt M1911 pistol in Norway. These pistols were to replace the Nagant revolvers (7,5mm M/1893) as the standard military sidearm in Norway. While the original pistol was known as the 1911 Colt, the designer and copyright owner were John Browning who had licensed manufacturing in the US to Colt. Norway attempted to get licensing through Colt, but discovered European production was through Fabrique Nationale. So in September 1914, Norway signed a contract with Fabrique Nationale of Belgium for manufacture. The pistol would be produced at Kongsberg Vaapenfabrikk in Norway.

The Kongsberg Colt remained in service with the Norwegian Armed Forces until being replaced by the Glock P80 in 1985.

The first test production at Kongsberg Våpenfabrikk in Norway occurred in 1917 and 95 pistols were finished and wrongly stamped “COLT AUT. PISTOL M/1912”.These pistols were identical to the Colt M1911 except for a minor detail on the hammer checkering. 100 pistols were ordered, but 5 were rejected during production. The serial range was from 1 to 95. Number 2 was stolen from the Norwegian Armed Forces Museum in 1978.

Kongsberg Våpenfabrikk was ready to start mass production in 1918. One significant change was now made. The slide-stop was extended down and back to make it easier to operate. This change required a cut-out in the left stock. This change had been suggested in 1916 but did not materialize on the production pistols before 1918. The new version had the left side of the slide stamped “11.25 m/m AUT. PISTOL M/1914.”, which was correct as the adoption of the gun was approved in 1914.Most of the pistols that had been marked “1912” were recalled to the factory to have the “new” slide stop installed. Production went on, and 22,311 pieces were made before 1940, including the 1917 test-run).

During the German occupation of Norway (1940–1945), the manufacture of the pistol, given the designation Pistole 657(n), was continued under German control. The Waffenamt acceptance mark (WaA84) was added in 1945 and only those 920 pistols produced that year were ever Waffenamt-marked. It is not likely that any of these Waffenamt-marked pistols ever saw any action during World War II as the first one, serial# 29615, was delivered March 29, 1945, and the last one, serial number 30534, was delivered on 5 May 1945 just before the liberation of Norway.[citation needed] In total, approximately 8200 pistols were made during the German occupation (serials 22312-30534). All of them were delivered to AOK Norwegen (Army) except 700 that were delivered to Maza Norwegen (Navy).

Excellent Kongsberg Norwegian Model 1914, dated 1926, with a serial number that is the range of 8,941 – 11, 820, from a total of 2,879 made that year, the Cal 11.25mm/45 ACP, with a standard 5” bbl, and original dark black phosphate finish in about 90/95 percent of its hardware. Original 2-pc diamond pattern checkered walnut with distinctive cutout for Norwegian slide release, in excellent condition. Slide marked on the left side: “11.25m/m AUT.PISTOL M/1914 No. XX412” with Norwegian crown proofs on the opposite side of sling behind the ejection port. The date “1926” is stamped on the right side of the frame. The frame on left side has SN in traditional locations, with the last 3 digits (412) marked on external components. Excellent overall with very good bore and mechanics. Finish overall very strong with a typical muzzle and slight wear on flats of slide from holster use. The frame is very good with some thinning of the finish on the front strap, grip safety, and mainspring housing. It comes with the standard Norwegian loop 7rd magazine. 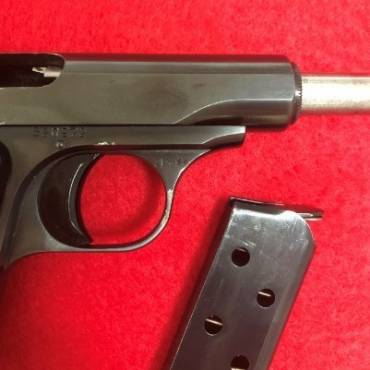